There are many great options available under $500. As a matter of fact, for the regular consumer, hobbyist, or entry-level 360 camera user, the best and most valuable options seem to land in the $300 range. In my opinion, this list gives the consumer a comprehensive view of the options available to them.

I think that these options all have their own merits; none of them are perfect, but they will each suit a certain type of person better than another.

Should you even invest in a 360 camera?

Today, we live in a world where Virtual Reality, especially with the recent advances in ray tracing, which once seemed like a sort of distant pipe dream, continues to grow closer to becoming an element of our everyday digital media culture. With this advancement in technology, more products which embrace this change are becoming available to the public. According to Jose Soriano and his photography blog, they are often used for panoramic photography and robotics.

Many photographers, filmmakers, and videographers have expressed significant interest in making content which features 360 degree views and potential to engage with elements of Virtual Reality to create cutting-edge, dynamic environments. For the average consumer, a 360 degree camera offers an unbelievably effective method of capturing memories in a more detailed and vivid sense than any photograph ever could! Many who enjoy adventures in the outdoors and other sorts of travels have began using 360 camera technology to make enriched documentation of their journeys. I’ve gone over some of the top 360 cameras in a bit more detail…

This camera has cemented its spot as one of the best 360 cameras in the market today. When it comes to still shooting and high accurate image stitching this here is your pick. It has the capability of recording natural 360* images using 23MP (7K) still image shooting.

The camera is equipped with superior noise reduction performances when shooting at night or indoors; with F2.1, F3.5 and F5.6 Aperture Capability.

You can save photos in RAW (DNG) and JPEG at the same time. Provides 360* live streaming in 4k, as well as produces realistic spherical videos with 4k quality. Having the capability of recording sound with its internal microphones from 4 different directions at the same time.

The Ricoh Theta Z1 is arguably the best 360* camera for both photos and video.  But it out paces the rest when it comes to its still image performance.

The Insta 360 R is the first of its kind. It definitely could have taken the first spot because of its unique design and functionality. Designed as a modular camera (i.e. has the ability to transform parts based on need), the Insta 360 R can transform from the 360 camera it is to a 4k wide angled one.

The dual lens holds capabilities of up to 5.7k resolution with H.264 recording, advanced image processing together with AI assistance that provides highly detailed, fine and appealing images.

When it comes to videos , this camera is the right one for the job helping you to capture the best moments with it’s versatility. It can also double up as a Go Pro, due to it’s modular nature and provides other fantastic features like invisible selfie stick , cinematic slow motion adn GPS. It can use AI assist from Flash CUT that can help in choosing the best shots and editing them to quality cinematic clips that can be shared.

This camera is truly a 360 cinematic juggernaut. 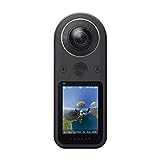 The Kandao Qoocam 8K is also regarded by most as the best 360* camera. As the name suggests it goes beyond the capabilities of other if not all 360 cameras, shooting at Maximum frame rate of 120FPS, 4K resolution. Its cinematic quality, especially when it comes to slow motion shooting , is in its own class.

This 2020 Design award Winner poses a sleek design  created to make it  easier for the user navigation as well as functionality, with the help of its larger screen.

The capability of this camera and its quality is high above the rest. For its price point it offers exactly what you demand from it.

The only downside is as reviewed by  many users that it may overheat, causing loss of sharpness in both photos and videos. That being said the quality it offers superceeds any cons it might hold. It also provides the invisible selfie stick as an added feature to its smooth shooting high resolution capabilities

Xphase Pro S Contains 25 sensors which are synchronised and genlocked. It provides the user with an easy,smooth and flexible editing workflow with optical stitching capabilities.

It can shoot timelapses and interval shots: 30, 45, 60, 90, 120, 180 or 240 seconds. Its design provides safety for it’s lenses witch aren’t fish eye but rectilinear. It also has manual true manual exposure capabilities i.e. with iso and shutter speed not just exposure compensation.

Once the user gets around to learn how to use this 360 camera, the capabilities and quality of shots and footage are beyond imagination. Suited virtual tour projects  due to its available  virtual tour software. 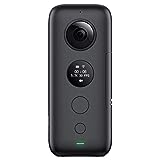 This camera offers high resolution images with up to 100 mbps stabilisation and is compatible with a majority of IOS and Android devices. The Insta 360One  X holds as the best 360 camera of 2018 and 2019, just from its capability, design and features. For anyone willing to start or step into the 360 space, this camera will for sure get you there at an amazing price.

With various environments and situations be sure to note that the Theta V will adapt due to its variety of shooting modes.

Shooting 4K video with this camera, you will get ultra realistic spherical videos and you are able to live stream 360 videos online. It gives superior video quality. Like The previous Camera it also offers independent microphones holding the capability of receiving sound from 4 different directions when you record your videos. 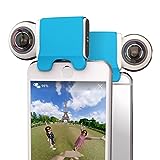 There are two versions of this attachable 360 camera, one for your iOS device and one for your Android. This device live-streams to youtube, facebook, and periscope, and the experience is made easy and accessible through the Giroptic iO 360 app, which is a fantastic app, by the way. This is an easy, plug and play device-- no Bluetooth or wifi are required to connect to the phone.

The camera has its own internal battery, too, which is fantastic. In other phones, the camera drains battery-life quite fast, so this is a major positive. The app is well-designed and easy to operate. No SD card is required, as the content your record will make its way directly to your phone. The downside of the separate battery is that you have to charge the camera battery separately. The photo quality is not the best, but it is not the worst either. Also, the camera plugs directly into the USB port, which means that the device must be held upside down when using the camera.

Up until the release of the Giroptic IO, Ricoh Theta S could very well deliver the best value for your dollar out of any 360 camera on the list.  This camera has an impressive still resolution of 14 MP, and also delivers with fantastic, full HD, 360 degree spherical video, which is supported by Youtube and comes through at 30fps.

The videos and photos you take on your Theta S can be transferred directly to your mobile device, too. Typically available for $300-$350, this is perfect for consumers, hobbyists, and professionals who are making their first foray into the world of VR.

This High Resolution option by Samsung is lightweight, durable, and offers an alternate operating option which allows you to catch 180-degree video with its wide-angle lens. Geared toward Samsung using consumers, Samsung’s Gear 360 creates an experience that is easy to interact with, the interface simplifies the process of shooting, editing, and sharing your experiences. Videos can be instantly shared on Youtube, Facebook, and Samsung VR.

The 25.9 MP photos make this a standout option, and the video is captured in a vivid 3840 x 1920 resolution. It is also waterproof; not to be submerged, but it can certainly withstand the wind and the rain. Also available for $300-350, this delivers a lot of value if you are looking for resolution that is among the best.

Nikon takes their attempt at a 360 device with their KeyMission. This is shockproof, freezeproof and waterproof device that comes equipped with WiFi and Bluetooth. The resolution is certainly impressive, as this camera boasts 4K Ultra HD video and shoots still photographs at 23.9 megapixels. It is lightweight and wearable, and perfectly suited for the outdoor adventurer.

Bearing some impressive features, this $500 option is good, but not quite as cost-efficient as its competitors. There are less expensive options that deliver better results; shareability, desktop software, and general performance should all be improved in Nikon’s future attempts.

Some of these manufacturers specialize in 360 cameras, whereas other brands such as Kodak and Nikon have also joined the race to create the best and most successful 360 camera. Best Quality 360 Camera vs Best Value 360 CameraAlthough it cannot be denied that cameras on the “$60,000” end of the spectrum will provide you with a very good method of capturing amazing images and creating Virtual Reality content, this price tag is certainly unnecessary if you are looking to engage with this new movement in photography.

Trying to enlarge the image without pixelating? Check out the Gigapixel AI review.

There are fantastic 360 degree devices currently available on the market for impressively affordable prices. Still, not all products are created equal (for better and for worse), and there are also a lot of cameras that do not deliver value in the way that many of their competitors do. Here, I’ve compiled a list of some of the most efficient and effective devices that should be considered by any potential purchaser of a 360 degree camera.