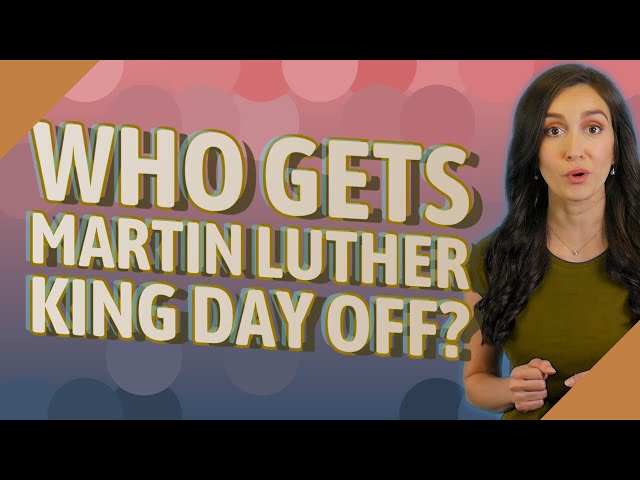 What Percentage of Companies Give MLK Day Off?

The History of MLK Day

Dr. King was assassinated on April 4, 1968, and the following year, Congress introduced legislation to make his birthday a national holiday. The bill was first brought to the House of Representatives by Representative John Conyers of Michigan, who had also introduced the bill in each congressional session since King’s death. The bill finally passed both houses of Congress in 1983 and was signed into law by President Ronald Reagan on November 2, 1983. The third Monday in January was selected as the holiday’s date, and it was first observed on January 20, 1986.

Since its inception, the holiday has been celebrated by Americans of all walks of life. In 1994, President Bill Clinton signed into law the Martin Luther King Jr. Federal Holiday and Service Act, which encouraged Americans to use the day as “a day on, not a day off” for community service in honor of Dr. King’s legacy.

Why companies Give MLK Day Off

Although some companies are closed on Martin Luther King Jr. Day, many continue to operate. Some companies may choose to give their employees the day off, while others may offer special events or opportunities to celebrate the holiday.

The decision to close or remain open on MLK Day varies from company to company. Some factors that may influence a company’s decision include the size of the company, its location, and its industry. For example, Companies that are located in areas with a large population of people of color may be more likely to close on MLK Day than those in other areas.

It’s also important to consider the history of MLK Day when thinking about why companies give employees the day off. MLK Day became a federal holiday in 1986, but it wasn’t always observed by companies. In fact, it wasn’t until 2000 that all 50 states began observing the holiday. As more states began recognizing MLK Day, more companies followed suit and began giving employees the day off.

The Importance of MLK Day

Although federal law does not require employers to give their employees the day off on Martin Luther King, Jr. Day, many companies choose to do so in order to honor the legacy of the civil rights leader. Some states have laws that mandate paid time off on the holiday, but in most cases it is up to the employer to decide whether or not to give employees the day off.

According to a recent survey, about 60% of companies in the United States give their employees paid time off on Martin Luther King, Jr. Day. This number has been slowly increasing over the years, as more and more companies realize the importance of honoring Dr. King’s legacy.

If your company does not currently give you the day off on Martin Luther King, Jr. Day, you may want to consider asking for it. Some employers are open to giving employees the day off if they know it is important to them. And even if your company is not willing to give you paid time off, you may still be able to take the day off without pay if you have accrued enough vacation days or personal days.

The Benefits of Giving MLK Day Off

There are several benefits to giving employees the day off on MLK Day. First, it shows that the company values diversity and inclusion. This is important to both potential and current employees, as well as to customers and clients. Second, it allows employees to spend time with family and friends, which can improve morale and increase productivity when they return to work. Finally, it shows that the company is willing to make accommodations for religious holidays.

While there are some benefits to giving MLK Day off, there are also some drawbacks. First, it can be costly for businesses because they have to pay employees for the day off. Second, it can be disruptive to work schedules if employees have already planned vacation days around other holidays. Finally, some employees may not want or need the day off, which can lead to resentment from those who do want or need it.

Ultimately, the decision of whether or not to give MLK Day off is up to each individual business. There are pros and cons to both sides, so businesses should weigh all factors before making a decision.

The Costs of Giving MLK Day Off

The costs of giving Martin Luther King Day off can vary greatly depending on the size of the company and its operations. Some companies may be able to absorb the costs easily, while others may have to make changes to their operations in order to accommodate the holiday.

The Pros and Cons of Giving MLK Day Off

Since the early 1990s, a growing number of companies have been giving their employees the day off on Martin Luther King, Jr. Day. According to a recent survey, about 60 percent of companies in the United States now offer this benefit.

There are pros and cons to giving employees the day off on MLK Day. Some argue that it is a way to show respect for Dr. King and his legacy. Others contend that it is an unnecessary expense for businesses.

Another benefit of giving employees the day off on MLK Day is that it can boost morale. This holiday is a chance for employees to spend time with family and friends, or to take part in community service projects. This can make them feel good about their company and more loyal to their employer.

Finally, giving employees the day off on MLK Day can be good for business. Companies that show respect for their employees’ cultures and backgrounds are more likely to attract and retain top talent. Additionally, customers may view these companies favorably and choose to do business with them over others

The Debate Over Giving MLK Day Off

There are many arguments on both sides of the issue, but there is one thing that everyone can agree on: MLK Day is an important day in American history. Whether or not your company gives you the day off, it is important to take some time to reflect on what Dr. King accomplished and how far we have come as a nation since then.

What Other Countries Do for MLK Day

In the United States, King’s Birthday is observed on the third Monday in January, which is around the time of King’s actual birthday, January 15. The day is a federal holiday, meaning that all non-essential government offices are closed and employees have the day off. King is one of three people to have a federal holiday named after them, the other two being President George Washington and Christopher Columbus.

In addition to being a federal holiday, all 50 states and Washington D.C. also observe the day as a state holiday. This means that state offices are closed and many state employees have the day off as well. Some states refer to the holiday by a different name such as “Civil Rights Day” or “Human Rights Day.”

How to Celebrate MLK Day

Martin Luther King, Jr. Day is a time to celebrate the life and legacy of one of the most influential figures in American history. The holiday, which falls on the third Monday in January, is an opportunity for Americans to reflect on Dr. King’s work for civil rights and racial equality.

Dr. King was assassinated in 1968, but his dream of a society where people are judged not by the color of their skin but by the content of their character lives on. In 1986, MLK Day was established as a federal holiday, and it is now commemorated with events and activities across the country.

If you’re looking for ways to celebrate MLK Day, there are many options available to you. You can attend a parade or march in your community, participate in a service project, or learn more about Dr. King’s life and work. Whatever you do, take some time to reflect on how far we’ve come as a nation and how much further we still have to go to achieve Dr. King’s dream.

The Future of MLK Day

Since the federal government first recognized Martin Luther King Jr. Day in 1986, many companies have followed suit, giving employees the day off to honor the slain civil rights leader. But with the rise of the Black Lives Matter movement and a renewed focus on racial injustice, some companies are rethinking their approach to MLK Day.

Some companies are choosing to use MLK Day as a day of service, with employees volunteering in their communities or participating in educational programs about race and racism. Others are using the day as an opportunity to engage in honest conversations about race and racial inequality. And still others are reevaluating their policies and practices to ensure that they are promoting diversity and inclusion throughout their organizations.

It is clear that MLK Day will continue to evolve in the years to come. As our nation wrestles with its history of racism and bigotry, we can expect more companies to use this day as an opportunity to reflect on how they can make a positive impact in their workplaces and communities.